Covid
​Please see our Covid guidelines here.
WERR, West End Road Runners is a friendly running club in the west end of Glasgow. (Scottish Athletics affiliated)
We're a community club as opposed to an uber competitive running club and we have runners at all ages and stages who do occasional parkruns, 10ks, half marathons and marathons.
Training
Due to current restrictions all runners and guests have to pre-register to run with us.
​We use Team App and guests can request to be added by contacting us here.
​Please note that we are extremely busy with requests just now and we ask for your patience.
​Thank you.

We meet at:
Woodend Bowling & Tennis Club
30 Chamberlain Road
Jordanhill Glasgow
G13 1QE (map on link)
Join Us
Information about joining us is here on this link :-) 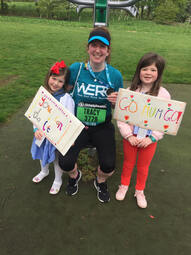 How far do you think it is from the bottom of Chamberlain to end of Southbrae and back? Because
that is what I did at my first night at WERR.
A year later, I ran my first half marathon.
I didn’t exactly excel at PE at school and it took me until I was much older to realise you could be
active without being sporty and I started going to the gym and taking classes. But it doesn’t have the camaraderie of a club or team.
I turned up at WERR absolutely petrified, but I couldn’t have been luckier to end up in the loveliest, most encouraging group. Everybody’s effort is equally valued and whether that ends up in a 40 minute 10k or an 80 minute 10k, the encouragement and the applause are the same. I feel like I have really found my thing. The impact the club can have on someone’s whole life is unreal.
And it turns out I am competitive too – I just never thought I was. I love the friendly competition and
how it spurs us on to improve and now I think, I won’t just be able to go further, I’ll be able to go faster too.
In the picture,I am with my wee cheer squad. One of the huge pluses of running for me is showing my girls that non sporty girls can still achieve really cool things.
More WERR Stories!